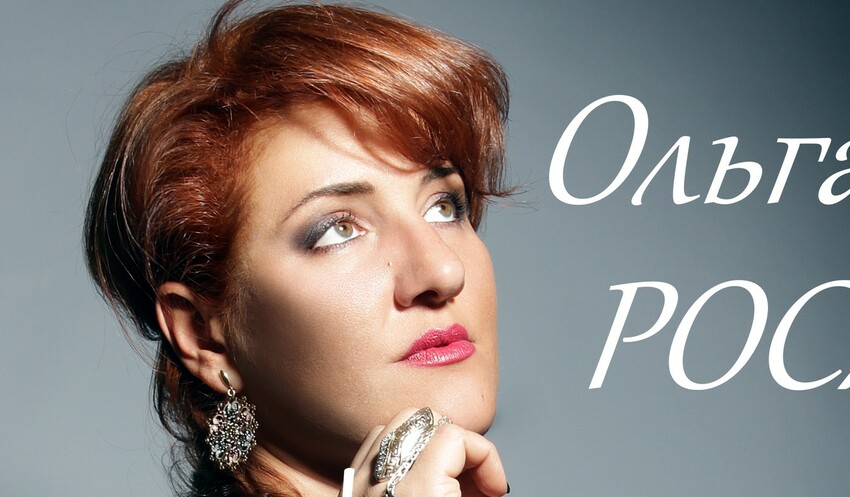 A  is the author-singer of the contractor in the lyrical style of chanson  and romances.

Multiple winner and winner of various awards and nominations from numerous national and International competitions-festivals.

According to the results of polls and studies major record organisations, such as "Monolith","si di land" and "Gamma music": Olga Rosa - "discovery of the genre of chanson - 2014."

Her tracks in the style of the pop genre, lyrical neo-and post-chanson, a city romance, classical romance , her style, voice *velvet* tone poems coming from the heart - are very popular with listeners , and as a result, Olga for a very short period of time became recognizable and popular.

Songs Olga Rosa can be heard in more than 60 Russian cities, the largest and most famous of FM waves , such as *Radio Chanson*,*Radio Dacha, and other popular FM radio stations of Russia, Europe and America, heard on many online radio waves, to find and sing her tracks in any directory karaoke around the world, listen to music devices, to set them as ringtones calls by leading mobile operators, such as *Beeline* - ("Hello"),*MegaFon* - ("Set beep"), to download tracks and albums on the *ay-Thuns* to listen to the Yandex and Google music to find her songs in the most popular licensed collections of SD disks "XXXL".

The tracks"Hits" Olga Rosa "Women's happiness", "friendship" and "Blizzard" are freely available in the rotation for all FM and online radio stations on a site "FM Promo", under the label "Monolith" and "si Di land", as well as on the website "Topic" under the label of "Gamma music".

We INVITE to cooperation of PR managers and concert Director.

just take the help in the organization of concerts and performances in Your city.

In 2014 Olga speaks in a joint program with Michael Chutko - the band's lead singer(4 octave), honored worker of culture of Ukraine, a professional musician, a teacher for saxophone.

2016 Olga Rosa - Organizer of the International festival "New Indigo", the eponymous online radio and independent production Advisory center, which provides support and assistance in the development of creativity, following the example of the promotion of Olga .

On all questions concerning the organisation of performances and concerts of Olga Rosa, holding solo concerts,participation in concerts, tours and performances, and invitations to private events, corporate events, You can contact me on e-mail: olgadominikos@yandex.ru

Effervescent energy and unique low timbre of the thoracic voice for several consecutive years of maddening to her many fans the magical charm of the artist. Mysterious, desirable on all concert venues in the country, sensitive Olga Rosa seriously excites the audience with their soulful hits and easily won the sympathy of the audience. Rare power performance style and arrangements, is known for his velvet voice and his special manner.. Somehow, most people in our country believe that the chanson – a song about the prison happiness, containing jargon of thieves, who sings a strange voice unshaven man. But in fact, far from it! Russian chanson today are any original works, songs which tell about feelings, not about thug romance. And one of the brightest representatives of the contemporary lyric of the song is the singer Olga Rosa. Despite the fact that the singer has become known relatively recently (first solo album appeared in 2013), Olga Rosa quickly became one of the most popular performers of Russian chanson. And today, everyone who wants Olga Rosa, his performance was adorned with a festive event has the opportunity to invite the singer to take part in the celebration. You just need to order the performance of Olga. It should be said that the manner of execution of songs the singer leaves no one indifferent. Because the reason her first album was called "Songs sung by the soul." Olga Rosa was always different from other singers exclusively mental manner of execution of lyrical pop songs and ballads. Amazing voice, beautiful music, poems that come from the heart and soul did Olga Rosa, a popular singer among the audience. These qualities helped the singer become one of the most popular performers of lyrical chanson. And now, you yourself can verify this by inviting Olga to take part in the ceremony. To date, the concert program Olga Dew offers to Your attention a few types of concert programs, the author's program in different styles - pop, neo/post-chanson, a lyrical genre, urban romance, but a separate romances, in both the auteur and folk. As Olga Rosa and Michael Chytko offer to Your attention joint concert program that includes songs, male and female vocals, duet songs, solo saxophone (Alto) and fiery retro disco!